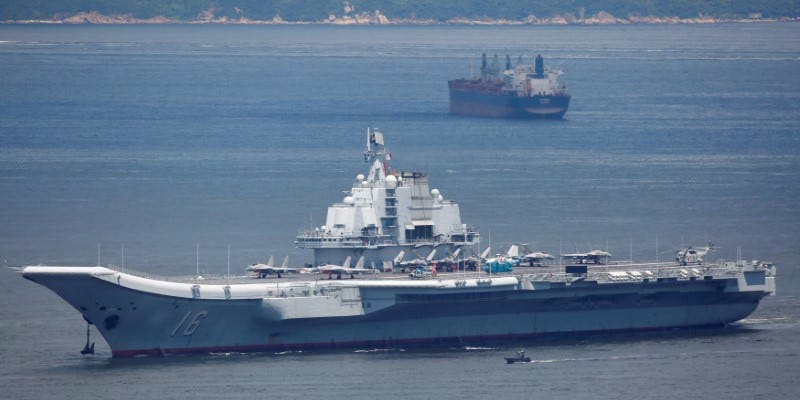 A fleet does not make a ship.

The launch of the new Chinese aircraft carrier, the Fujian, has created a great stir in the American media. The reason may be more psychological than military. Since 1945, the United States has grown accustomed to being the dominant aircraft carrier power in the world.

Other countries – Britain, France, even Australia and Argentina – operate smaller carriers, but mostly with more limited capacities. And the Russian aircraft carrier Admiral Kuznetsov, famous for its damage in 2018 when a shipyard crane fell on the ship, seems designed no more for comic relief.

Only the United States has a truly carrier-centric navy. But now comes China, which looks likely to build at least six carriers.

However, a navy is not limited to the number of its ships. Tactics, experience, training and traditions are also important factors. If sheer tonnage were the only criteria for an efficient fleet, Britain’s Royal Navy would never have achieved maritime dominance for centuries.

For now, the naval air force of the People’s Liberation Army Navy (PLAN) is not a rival to America’s. The US Navy has 11 active nuclear-powered aircraft carriers, each capable of launching nearly 100 planes and helicopters.

China’s first aircraft carrier, the Liaoning, was built on a rusty former Soviet Navy hull. The second, Shandong, is a ski-jump design of around 60,000 tons, the equivalent of Britain’s Queen Elizabeth-class aircraft carriers. These types of ships can carry about 40 aircraft, but can only accommodate short take-off and vertical landing (STOVL) aircraft, which limits aircraft weight and performance.

Fujian is different but that’s not enough

However, the 80,000 ton Fujian resembles an American aircraft carrier, with its flat deck capable of launching and recovering high-performance aircraft. Although the Fujian is powered by steam turbines, it is nearly the size of a 100,000 ton nuclear-powered Nimitz or Ford class carrier.

Most surprising to Western observers is that Fujian will be equipped with an advanced electromagnetic aircraft launch system (EMALS), similar to Ford-class ships.

The US Navy’s reliance on aircraft carriers has long drawn criticism from those who question the wisdom of relying on a handful of expensive ships in the face of anti-ship missiles, ultra-quiet submarines, hypersonic weapons and “killer carrier” ballistic missiles.

But in numerous conflicts, from Korea to Afghanistan, the United States has demonstrated a consistent ability to send floating airfields on long-duration missions to places mostly inaccessible to ground-based air power.

What makes this possible is not just the ships. It’s about having the right aircraft, pilots, mechanics and ammunition, and perhaps most importantly, the experience of maintaining air operations in rough seas and bad weather.

Nor do American aircraft carriers work alone. Carrier strike groups, which include anti-aircraft and anti-submarine escorts, surround the carrier in a tightly integrated team that requires practice and skill to operate properly.

The US Navy has enough problems. For example, EMALS catapults on Ford-class carriers have been plagued with reliability issues. But at least the US Navy doesn’t have to build an aircraft carrier fleet from scratch.

There’s no reason why China shouldn’t be an aircraft carrier power if it wants to be. The question is whether he will devote the resources and attention needed to create an efficient carrier fleet, and how long it will take to get there.

Michael Peck is a contributing writer for Sandboxx and Forbes. It can be found on Twitter and LinkedIn.