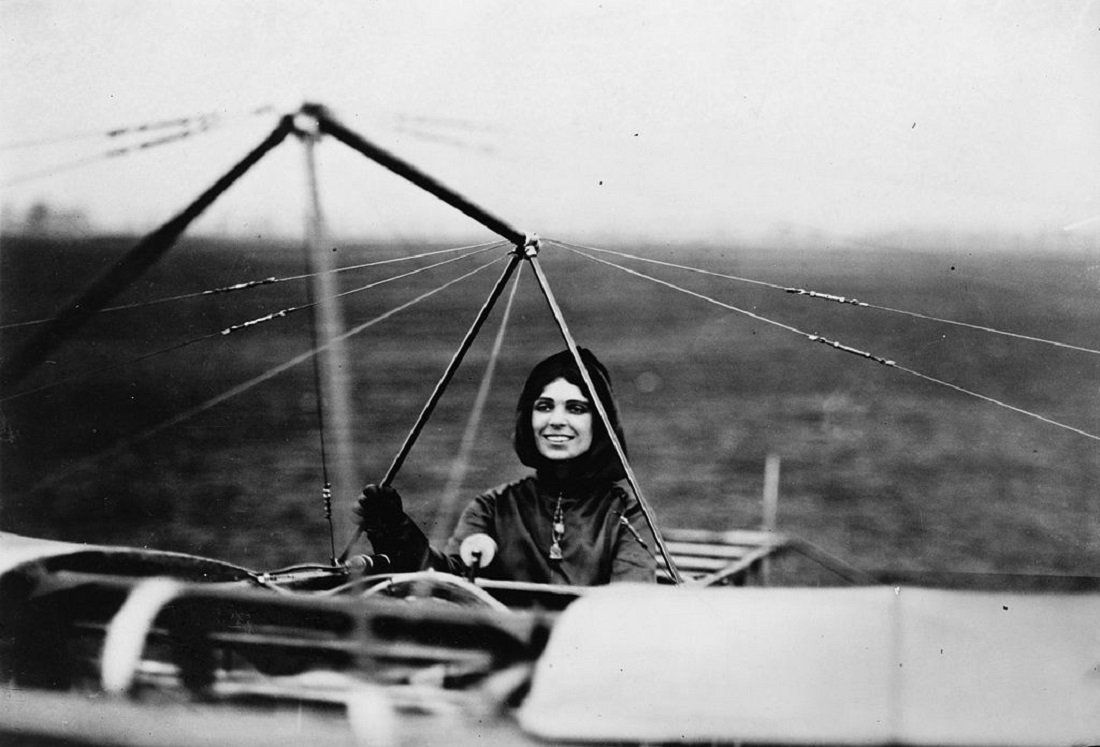 On August 2, 1911, the Aero Club of America granted an FAI pilot’s license to avid adventure journalist and screenwriter Harriet Quimby. It was the first license to be awarded to an American aviator.

With a wealthy background and liberal upbringing among San Francisco artists and gypsies around the turn of the 20th century, Quimby evolved in circles in which women were allowed to go their own way. With a flair for writing and a love of travel, she moved to New York City and excelled in a position at Leslie’s Illustrated Weekly as a journalist and photographer.

Born with a natural passion for new technology, Quimby was one of the first journalists to embrace the use of a typewriter and even drove herself in a bright yellow car; it was inevitable that she would be captivated by the exciting advancements in aviation.

A meeting with the Moisant family allowed him to discover aviation. While covering the Belmont Air Meet in New York in 1910 as a reporter, she witnessed the thrilling sight of John Moisant flying around the Statue of Liberty and crossing the finish line in first place in his self-designed and built Moisant Biplane – the world’s first all-metal aircraft. John and his sister Matilde became close friends of Quimby, the two women learning to fly together in Hempstead, New York. After four months and 33 flying lessons, Quimby obtains license number 37 from the ACA and Matilde becomes the second woman to obtain the license.

This license to fly anywhere in the world gave him the opportunity for adventure, freedom and fun. Never one to blend in with the crowds, Quimby joined the Moisant International Aviators and began earning an income as a member of the show crew, beautifully decked out from head to toe in a purple satin outfit, with his pants tucked into their elegant lace. boots. She has written articles about her exciting experiences, traveling to the United States and Mexico as a pilot.

Yet his views extend even further. With the stories of a new generation of pioneering female aviators making headlines in Europe, Quimby decided in 1912 to take on a challenge that she hoped would help mark her place in history: a cross-Channel flight to England. -France, a feat which had been achieved by Louis Blériot for the first time only two years previously. Quimby would be the very first woman to attempt it. Traversing in thick fog, she meticulously followed the compass as shown by British pilot Gustav Hamel, landing safely at Hardelot, just 40 km south of her intended destination. This daring adventure was not to attract the media attention it deserved; unfortunately the event was overshadowed in the newspapers by the sinking of the Titanic two days earlier.

Known for her attention to safety precautions, Quimby was a very competent pilot who saw no reason for other women not to take advantage of flying. Quoted in Good Housekeeping, she commented:

“There is no sport that offers the same amount of excitement and fun, and in return requires so little muscle strength. It’s easier than walking, driving or getting around by car; easier than golf or tennis … Flying is a beautiful and dignified feminine sport … and there is no reason to be afraid as long as you are careful.

Yet those early days of aviation were fraught with danger, and many pioneers lost their lives in plane crashes. This is how Quimby tragically lost her life at the Harvard-Boston Aviation Meet just a few weeks after crossing the English Channel: flying with the son of the event organizer William Willard as a passenger in a Blériot monoplane, she lost control of the plane and the pair were thrown into the waters of Boston Harbor, watched in horror by 5,000 spectators.

A woman who embraced the new century and its innovations, Harriet Quimby is remembered as a courageous pilot and pioneer whose legacy continues to inspire those who follow her flight path.

“In my opinion, there is no reason why the plane should not open a successful business for women. I see no reason why they can’t make a nice income from transporting passengers between adjacent towns, why they can’t make some income from delivering packages, taking pictures from above, or taking photos from above. conducting flight schools.
– Harriet Quimby, 1st American female pilot

Images: George Grantham Bain Collection at the Library of Congress.