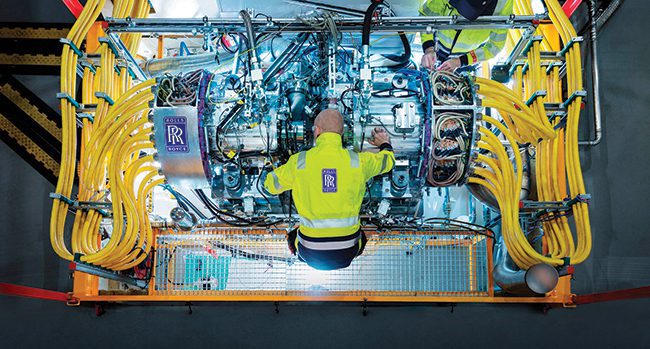 Preparing for explosive growth in the electrification of mobility, British engineering giant Rolls-Royce is developing various all-electric and hybrid-electric drive systems for aircraft. In one of its most-watched hybrid-electric aerodynamic propulsion and power systems programs, work is underway to develop a formidable system that could power future megawatt-scale aircraft. In December, the program scored a notable triumph just weeks after initial testing began.

On Dec. 7, the company said its Power Generating System 1 (PGS1) delivered more than one megawatt of electricity to its newly refurbished 108 test bed in Bristol, UK (Figure 4) . The milestone is a “great achievement” for the system, which was designed with a capacity of 2.5 MW, noted Adam Newman, chief project engineer at Rolls-Royce’s Aviation Futures. “Our generator is about the size of a beer keg, but it has already produced enough electricity to continuously power around 1,000 homes, which really takes the technology to new levels.”

The most powerful flying generator in the world

The triumph is particularly significant for Rolls-Royce because the PGS1 demonstrator stems from the E-Fan X technology demonstrator project, which Rolls-Royce has begun to develop jointly with aircraft manufacturing giant Airbus. The pioneering E-Fan X project involved removing a single engine from an Avro RJ100 aircraft (a 100-seat regional jet) and replacing it with a hybrid electric propulsion system powered by an AE2100 gas turbine, 2 .5 MW and a battery system. But while Rolls-Royce and Airbus had hoped the system would become “the most powerful flying generator in the world”, the E-Fan X partnership concluded in 2021 “when both parties agreed that it was not no need to create a real aircraft for the test flight”. says Rolls-Royce.

Rolls-Royce, however, continued development of the 2.5 MW generator, continuing work at its bespoke factory in Trondheim, Norway. “As future hybrid-electric aircraft opportunities emerge in the megawatt class and above, we want to be as prepared as possible to offer an off-the-shelf solution,” Newman said.

The PGS1 project started in June 2021 with testing of the AE2100 motor element, specialized controls and the thermal management system. The company then brought in a fully operational generator and 3,000 volt power electronics.

“The challenge with this type of hybrid technology at this power level is really weight and thermal management. Batteries weigh more than kerosene, and once you add the cables, power electronics and cooling systems for each component, you also have the inevitable increased complexity,” explained Riona Armesmith, chief engineer of the Rolls-Royce Hybrid Electric Propulsion project. “So we need to make the PGS1 as light, reliable and easy to use as possible. And if we can do that, we’ll be in a great position, with a fully integrated, ground-tested heat and power management system. This means that whenever someone comes up with a concept for a hybrid or all-electric aircraft that requires megawatt power, we’ll be good to go.

The company says the PGS1 program will be a key part of its sustainability strategy, which includes developing innovative power and propulsion systems, as well as improving gas turbine performance and promoting energy efficiency. use of sustainable aviation fuels. Rolls-Royce also has several kilowatt initiatives underway. In November 2021, his “Spirit of Innovation” aircraft developed as part of his “Accelerating the Electrification of Flight” project reached a top speed of 387.4 miles per hour, possibly marking a record for the all-electric vehicle the fastest in the world. In another project, Rolls-Royce will fly an all-electric vertical take-off and landing (eVTOL) vehicle – essentially a four-person flying taxi – which will feature a 100 kW class electric propulsion unit.

According to the company, the electrification of mobility is a promising new frontier that could help reshape aircraft design. All-electric and hybrid-electric drive systems allow aircraft to fly with power from renewable resources or fuel cells instead of using only fossil fuels, and make new aircraft designs possible, a he declared. “Electric technology will allow us to increase aircraft efficiency, reduce aircraft emissions and fuel burn, and build aircraft with ultra-low noise levels and new short take-off and landing capabilities. and vertical.”

Much progress has already been made, the company noted. “Light sport and trainer aircraft are already flying electrically today. Commuter-class electric planes and air taxis are on the way, and we’re aiming to see the first all-electric plane carrying people and cargo by mid-decade. The company recognizes that this is a bold vision. “But it’s worth doing for a connected future that protects our planet’s environment for generations to come,” he said.

—Sonal Patel is an associate editor of POWER (@sonalcpatel, @POWERmagazine).