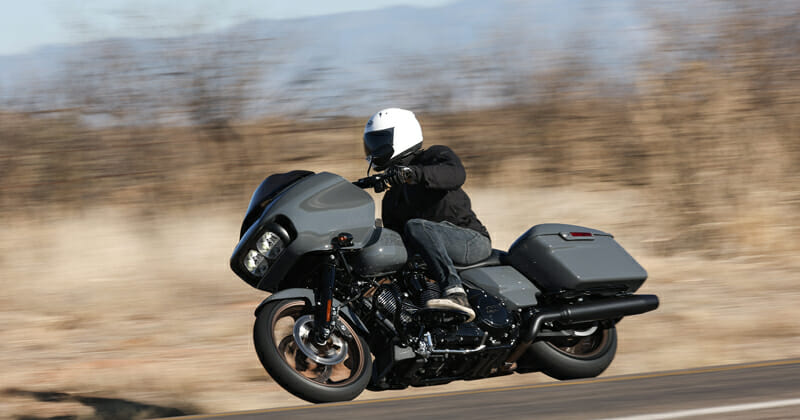 It’s been over two decades since Harley-Davidson has had a factory road racing effort (remember the VR1000?), and even longer since they won a championship, but this nap of Rip van Winkle’s size is now complete thanks to Kyle Wyman’s performance in MotoAmerica’s 2021 King of the Baggers series. This bike started out as a Road Glide and was heavily customized (a very modest understatement), but Harley-Davidson is taking inspiration from it to create a new trim level called “ST” for the 2022 Road Glide.

Harley has historically classified the Glide as a “Grand American Tourer”, but Paul James (Harley-Davidson Public Relations Manager) told us that ST stands for “Sport Touring” as the Motor Company seeks to provide a platform for ” riders who lean into the performance side of the equation on touring bikes.And in one specific way, it’s a bargain: the ST gets the 117ci engine that was previously only available on the CVO at The MSRP for the ST models is nearly half that of $29,999, and the $7750 premium over the base bikes gets you several upgrades from the Screamin’ Eagle catalog.

The biggest (both figuratively and literally) is the Milwaukee-Eight 117 ci V-Twin, which is capable of 106 horsepower at 4750 rpm and 127 lb-ft of torque at 3750 rpm thanks to a shaft camshafts, improved intake and exhaust for 6.7% more torque than the Road Glide Special’s 114 ci engine. You can feel the extra punch (and nothing quite resembles a V-Twin), but with a claimed curb weight of 842 pounds, you won’t exactly feel like Kyle is roaring down the straight at Daytona.

More notable is the suspension, which has been upgraded with taller preload-adjustable shocks. The base bikes have 2.1 inches of travel, while the ST ups that number to 3.0 inches. It might not be a huge change on paper, but there is a noticeable increase in lean angle before the floorboards start to scrape. If you’re looking for even more, there’s an optional set of Öhlins-designed Screamin’ Eagle shocks that are surprisingly close to the same parts found on Wyman’s racer. They’re 13 inches tall and offer the longest travel Harley has ever offered, plus they look pretty nifty with remote reservoirs sneaking between the rear fender and saddlebags.

This highlights my main issue with the ST: Harley wants it to be the starting point for customers who want to build a performance bagger, but there isn’t enough differentiation to justify creating a new model. . There are several minor cosmetic tweaks, such as a shorter front fender, shallower saddlebags, blacked-out transmission, and deletion of the passenger seat/footrest, but the Road Glide ST rides like the Road Glide from base with a bit more punch and cornering clearance, and I’m not convinced it’s worth the extra $7750.

Brad Richards is Harley’s vice president of design, and he said Cycle News something I liked to hear: “We create a motorcycle and give it to our customers. They take it apart, cut things, solder things and come up with a new aesthetic. We see what they create and it inspires us in the design studio. I call it a conversation, and language is the motorcycle.

But the ST makes me feel like Harley needs to listen more – the idea of ​​a “performance bagger” may not make sense to all riders, but my experience as a rider in southern California suggests HD lags behind. Harley enthusiasts who push this genre forward locally lift the bikes more than three inches for cornering clearance and slap stereotypical sportbike components like Öhlins suspension, Brembo master cylinders/calipers and wheels from 17 inches for stickier rubber.

If you want a $30,000 Harley performance bagger with a warranty, then I would consider getting a base Road Glide, ordering the 131 ci crate motor (about $6250) and Öhlins suspension (about $1400 ) and go from there. I like that Harley thought about offering a performance option, I just wish they went further with the changes.

The Road Glide isn’t the only bike Harley is giving the “ST” trim to—the Street Glide and Low Rider also benefit from the lineup expansion. Our Low Rider test is coming soon, but Harley gave us some time on the Street Glide ST as well.

The main difference between the Road Glide and the Street Glide is in the fairing – the former has a fork-mounted fairing while the latter has a frame-mounted fairing. This results in slight differences in the placement of gauges, mirrors, and Boom! Box infotainment system, but the choice between the two models is primarily cosmetic, with some riders preferring the Street Glide’s “Batwing” fairing while others prefer the Road Glide’s “Shark Nose.”

The basic riding experience is pretty much identical between the two bikes, though the Road Glide offers better wind protection at highway speeds. Despite that, I prefer the Street Glide because it feels more compact from the cockpit and it weighs 28 pounds less. Either way, you’ll get yourself a classic slice of Americana—and by way of the ST, you’ll get some extra horsepower and suspension clearance in the process. NC

Click here to read the Review of the 2022 Harley-Davidson Road Glide ST in the Cycle News Digital edition magazine.