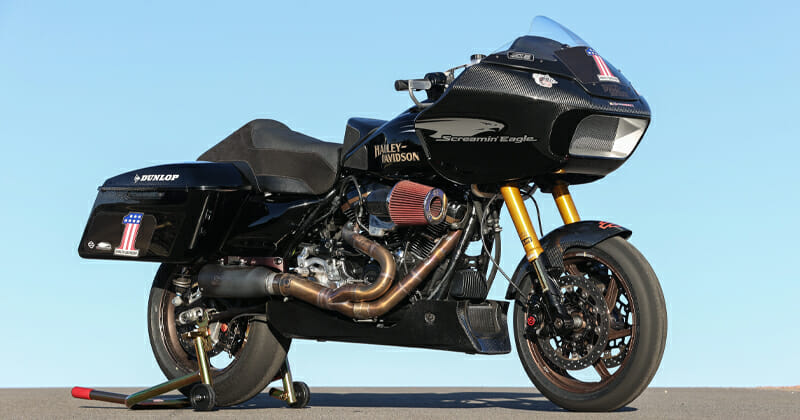 The popularity of MotoAmerica’s King of The Baggers series has skyrocketed recently, and Harley-Davidson just let us take a few spins on the title-winning Road Glide. We are still buzzing

“I know it sounds strange, talking about riding a bagger on the track.” Bjorn Christensen is Harley-Davidson’s Head of Vehicle Dynamics and he summed up my thoughts for the day perfectly. But this is no ordinary bagger—it’s the Harley-Davidson Screamin’ Eagle Road Glide ridden by Kyle Wyman in the MotoAmerica King of the Baggers championship last season.

In 2020 MotoAmerica kicked off the King of the Baggers series with an exhibition race at Laguna Seca. The initial announcement was unexpected to most and ridiculed by some – yours truly had to confirm that it wasn’t an April Fool’s joke.

Paul Carruthers, MotoAmerica’s communications director, admitted that “I’m a bit of a road racing purist, so I racked my brains at the Laguna Seca Invitational.” But after the event he realized it could work and that King of the Baggers had “opened up the other classes to racing fans that we hadn’t seen before”.

MotoAmerica apparently liked what they saw, as King of the Baggers expanded to a three-race series the following year. And in that inaugural season, Harley-Davidson entered a factory-backed team with brothers Kyle Wyman and later Travis Wyman. Travis finished fifth overall as a mid-season substitute, while Kyle earned himself the number one plate with a championship-winning season. He’s also made a place for himself in HD history, as The Motor Company is set to put Kyle’s bike in their museum. But first they gave Cycle News the opportunity to mount it. No pressure, right?

The two Wyman brothers were on hand to tell us about the changes Harley-Davidson made to convert a Road Glide from a “Grand American Tourer” to a racer. As Kyle said, “We’re developing superbikes, starting with a very different platform.” HD was very open on some specs and shy on others. What they weren’t shy about was the importance of this bike – there were some less than subtle reminders to relax as the KOTB was destined to go to Harley’s Museum in Milwaukee immediately after we were done .

Their attitude seems appropriate because there is simply nothing subtle about this bike. This is evident from the moment you swing your leg over the 36.4-inch-tall seat – good luck trying to get it flat. I’m 6’3” and still appreciated having a handler on the back of the bike before taking off. Part of the difficulty is that you have to spread your right leg well off the exhaust or you’re guaranteed to melt your leathers on the gigantic Screamin’ Eagle pipe. Heat is the big-displacement V-twin’s biggest enemy, and Harley fights back with extended fins for more surface area and an extra oil cooler that’s tucked away where the headlights used to be in the fairing.

Hit the magic button and you’ll find that the exhaust is also gigantic in sound. The name “Screamin’ Eagle” has never been more accurate. As I click the shifter into first gear, a piece of advice from Travis Wyman comes to mind: “You can’t put enough effort into the shifter, your mistake would be not putting enough … downshifting is where the drama can be if you don’t have good blip and clutch action.

Kyle mentioned his only accident last season was due to a missed downshift, which prevented him from slowing down enough to take a turn. I make it a point to really exercise my will on the shifter.

I start my time around India Motorsports Ranch tentatively trying to get to grips with the bike, and can only laugh at the juxtaposition of a Road Glide fairing with the ergonomics of a sportbike. One of the first things designed on the new bike was a 3D printed knob affixed to the top of the tank to give the rider the ability to leverage the tank with their leg when in the high seat.

Additionally, the King of the Baggers bike features nearly flat bars with adjustable offset and peg locations that are so different from stock that the left peg is welded to the motor housing! In other words, your left boot gets plenty of vibration from the 2146cc V-twin fury, especially at race pace – a stock 131 cubic-inch crate engine at around 5800 rpm, while Kyle Wyman averages 6000 rpm during competition.

India’s main layout is 2.75 miles and 21 turns. But coming out of pit lane, there are only a few right turns before I’m on the 2200-foot main straight and demanding all the 131-cubic-inch engine has to offer. Harley reps would only say that the motor produces “over 150 horsepower” at the rear wheel. They were also willing to share that the peak torque is 150 lb-ft at the rear wheel and the engine impressively produces at least 120 lb-ft throughout the rev range. The torque is truly staggering, and I can always feel it pushing me forward, although the power never manages to scare me off the way a real superbike does right away.

This is largely due to the wheelbase and weight. The former ensures that the front wheel won’t ride up, and the weight can’t be avoided: the minimum weight was 635 pounds for the 2021 season. These two elements also play an important role when it’s time to lose speed . There’s ample engine braking thanks to the monstrous cylinders, but the braking hardware is quite impressive. Kyle had the team at Harley use the same setup as his MotoAmerica Ducati race bike—Brembo master cylinders and Accosato calipers. I wasn’t willing to test it myself, but Kyle says that because of the wheelbase, it locks up the front end under hard braking long before you can get the rear wheel off the ground. Because of this, it can use the rear brake a lot more than on a traditional race bike, and that’s why this bike also features a full front brake caliper/rotor setup on the rear wheel. Kyle says he splits the braking force roughly 80/20, while Travis says he was front-brake exclusively. I tried to use the rear brake, although the ergonomics made it a bit difficult to access the pedal.

The King of the Baggers bike is full of surprises, but by far the best is its handling. It offers a 55-degree lean angle on both sides – amusingly, Kyle notes that the first thing to scratch on the right side is the exhaust, while the first thing to scratch on the left is the primary cover. It takes less effort than you might think to lean the bike over, as it’s all built on the stock frame, and the weight/wheelbase combination means it’s pretty stable all the way through the bend. Mid-corner corrections require a bit of muscle, but Öhlins superbike forks and custom shocks are perfectly matched to the bike’s characteristics. Funny, what happens when you have a factory guaranteed budget and a pro racer who knows how to tune the bike to what he wants, right?

I did six laps on the championship bike and I will never forget any of them. How many times do you say you rode a bike that ends up in a factory museum? It’s a fun bike with an incredible amount of theatrics, but the experience reminded me of the importance of having the right tool for the job – a point that was emphasized when I arrived after a three-lap session. and that I was immediately met by two Harley techs who had leaf blowers pointed at the engine to help cool it down.

Sometimes you can create something hyper-specialized from scratch, and sometimes you just have to work with what you have. The result is entertaining and attracts new fans to road racing, and it’s both great news for the sport we all love.

Harley-Davidson has many changes planned on the 2022 motorcycle to defend its crown. Want to see this and more? For next season, King of the Baggers continues to grow into a seven-round series – you can watch the first race at Daytona during Bike Week, March 10-12. NC

After Ukraine, Europe is wondering who Russia’s next target is – Boston News, Weather, Sports