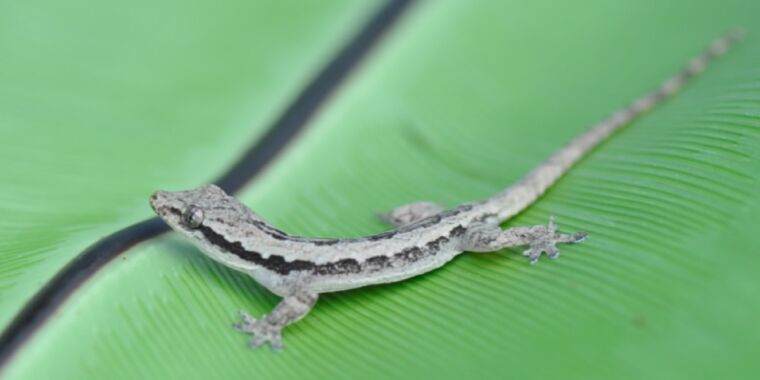 There’s rarely time to write about every interesting science story that comes our way. So this year, we’re once again releasing a special series of posts on the Twelve Days of Christmas, highlighting a science story that fell through the cracks in 2020, each day from December 25 to January 5. wildlings use their tails to stabilize the landing after colliding headfirst into tree trunks.

Examples of soaring animals abound: flying squirrels, for example, as well as certain snakes, lizards and frogs. Now we can add geckos to this list. Researchers caught Asian flat-tailed geckos gliding in the wild on high-speed video and found they were using their tails to stabilize the landing after crashing headfirst into tree trunks, according to a article published in September in the journal Nature Communications Biology. They checked the biomechanics by building a mini gecko-bot and simulating gliding behavior in the lab.

As we previously reported, the little gecko is capable of extraordinary prowess in locomotion, easily weaving along vertical walls and even traversing short distances on water. Precisely how they accomplish these feats has long interested scientists. For example, geckos are known to be expert climbers, capable of stick to any surface thanks to the tiny hair-like structures on the bottoms of their feet. Small lizards can also glide along the surface of the water at high speed to escape predators. They can’t do it very long; the necessary energy expenditure is too great.

A study 2018 found that mouse-sized lizards use a combination of surface tension and a snapping motion to run across water. Last year, researchers gained insight in the fundamental question of why geckos have so many toes. It appears that geckos’ ability to reorient their flexible toes is a major factor in allowing them to realign and adapt to changes in gravity (load).

These two studies come from the laboratory of the biophysicist of the University of California at Berkeley, Robert Full, who is also co-author of this last article. This time around, Full and his fellow co-authors – Ardian Jusufi and Rob Siddall, both of the Max Planck Institute for Intelligent Systems in Stuttgart, Germany, and Greg Byrnes of Siena College – were intrigued by the reports. of ground on the gliding flight of flat-tailed geckos. and skydiving, although this behavior has never been studied quantitatively. Previous research had placed geckos in a wind tunnel and found that the animals could indeed glide smoothly, often using their tails to help their bodies spin through the air.

Based on this, the authors hypothesized that the Asian flat-tailed gecko would not only glide smoothly in its natural habitat, but would also use its tail to turn and steer toward the chosen landing site. This species lives in trees and is able to jump several meters from one tree trunk to another, usually to avoid predators. Jusufi suggested conducting experiments with these geckos at a rainforest wildlife sanctuary in Singapore.

First, they collected several geckos (with and without a tail). They set up a platform several meters above the ground, from which the geckos jumped and slid to a nearby tree. High-speed cameras recorded the hovering jumps, revealing that a typical jumping gecko can reach speeds of around 6 meters per second (about 13.4 miles per hour).

Those geckos with tails were able to consistently land on the target trunk without falling, while those without tails could not maintain their grip after landing. The team expected the geckos to execute a “controlled collision” landing, much like flying lizards. Instead, the geckos literally crashed headfirst into tree trunks, using their tails to stabilize the landing.

“Our attempts to film the little camouflaged lizard in the rainforest revealed a fall arrest response that no one thought these geckos could do and showed us that their tails were entirely understated,” said Jusufi. “Previously, contact tails were thought to be used to maintain grip during rapid wall running, while the results presented here suggest that geckos exhibit behavioral exaptation to improve landing success in the wake of their directed aerial descent.”

Specifically, when a gecko lands, it bends its torso backwards to cushion the impact, sometimes up to 100 degrees. This means the front feet lose their grip, while the back feet hang on for life. When the gecko backs up, it also pushes its tail into the trunk to help dissipate the energy of the collision. Essentially, the tail serves as a fifth leg, helping to stabilize the animal after landing. Geckos that had naturally lost their tails could not dissipate enough energy, which is why they fell.

“This field finding of gecko perching behavior has important implications for our understanding of tails as multifunctional appendages that animals can rely on,” said Jusufi. “From inertia to contact tails, they facilitate the most extreme transitions, like from gliding to hitting a wall. One of the most dramatic transitions we can think of in multimodal locomotion is landing on a vertical surface from a height – fast glide to a stop.”

To verify their observations in the field, the team built a gecko-inspired robot, complete with a flexible torso, four flexible feet with Velcro pads on the bottom, and a detachable tail. The robot was programmed to bend its tail when its front foot hits a surface. A microcontroller on the robot’s shoulder activates a motor, causing a tendon to push the tail into the wall to stabilize the landing.

The researchers used a catapult to launch the robot towards a landing surface: a wooden plate covered with a sheet of felt, to simulate a tree trunk. Just below was a second plate connected to a force sensor, positioned so that only the robot’s rear feet made contact when landing. Jusufi et al. filmed their launches and used the footage to extract pose information from the robot upon landing.

Result: the longer the gecko’s tail, the weaker the force that pulls the rear feet away from the surface and the easier it is for the robot to hang on after the crash landing. When they removed the tail from the gecko-bot, however, the forces on the rear feet were too high, causing the robot to lose its grip, bounce and fall, just like its tailless living counterparts. Thus, the tail is indeed essential in stabilizing the high-speed forced landing of the gecko. This work could one day help improve robotic locomotion, Jusufi says, making bio-inspired robots more robust and easier to control.