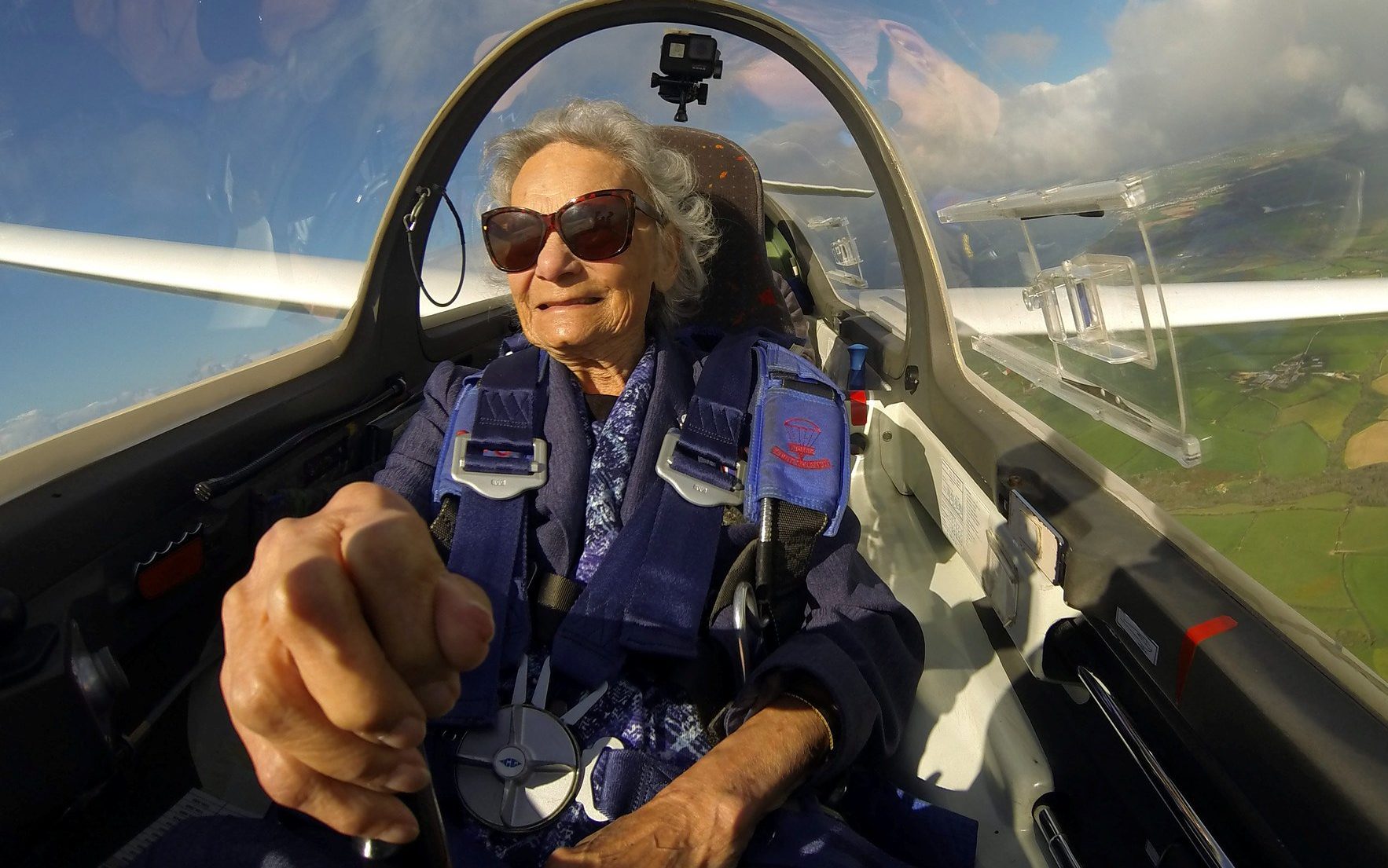 A former WW2 RAF plotter took the controls of a glider in the skies of Cornwall on a flight to raise money for the Armed Forces charity Help for Heroes… just a week before his 100th anniversary.

Kate Orchard, who lives in Camborne, Cornwall, took off from RNAS Culdrose, near Helston, on a bank holiday Monday, with the Seahawk Gliding Club, and, under the pilot’s instructions, had a faultless flight.

She said: “It was a beautiful trip. The team there in Culdrose was absolutely brilliant. I really enjoyed the flight; I even took orders at one point.

“I followed all the instructions the pilot gave me and I’m happy to say we didn’t end up somewhere in the sea,” she laughed.

Coverage of her daredevil fundraiser was widely reported, and afterwards she was inundated with cards, calls and gifts.

She explained, “I had a lot of phone calls and the doorbell rang six or seven times. I got lots of parcels and flowers, and even a nice big bottle of champagne and chocolates from the RAF in Melbourne, Australia. It’s still good from them.

“I also had an RAF card here. Cards, champagne, cakes, chocolates… I drank so many of them. That’s wonderful. Thank you.”

Kate was born into a large Anglo-Indian family of 13 siblings, her father working as Chief Telegraph Inspector on Indian Railways.

In 1941 India established the Women’s Auxiliary Corps (India), recruiting women to help with the war effort and 20-year-old Kate and two of her sisters volunteered. A year later, she was working at the Air Defense Centre, Screening Room Number 5, alongside the RAF and Indian Air Force, as a plotter/cashier on 24 hour watches, plotting aircraft targets and sending signals to air warning systems.

She rose to the rank of Warrant Officer First Class and became a trainer for new plotters. She also met her husband, Bill, during the war who was serving in India with the Royal Artillery before being later sent to Burma. After marrying in 1944, after the cessation of hostilities, in 1946 the couple moved to Bill’s house in Cornwall – Kate’s first visit to the “homeland”.

She proudly wears her 1939-45 and Indian Service medals when attending VJ VE Day and Remembrance Day services and was present at Bentley Priory in 2015 for the 75th anniversary commemorations of the Battle of Britain.

She was also invited to attend the annual Battle of Britain Sunday service at Westminster Abbey, which was also attended by the Duke and Duchess of Cornwall, the Prime Minister and many other dignitaries. Indeed, she enjoyed a friendly chat with Their Royal Highnesses at a reception after the event.

And, in recognition of her past service in the United Kingdom (Overseas) during World War II as a member of WAAF personnel managing and operating the Dowding system, she was made a veteran member of the Association of Royal Airforce Fighter Control Officers.

Explaining why she chose to fundraise specifically for the Armed Forces charity, she added: “I’m so glad I chose Help for Heroes. This is the most meritorious cause. They sacrificed a lot for us. I believe passionately that it is very important that all ex-servicemen be taken care of, especially those who are unlucky enough to have physical or psychological injuries.

“Kate is a lovely, wonderful woman and we thank her for her fundraising efforts. It was great to see the photos of her inside the cockpit, clearly enjoying every minute of the flight. she will reach the same heights of pleasure on her 100th birthday next week.Happy Birthday, Kate, from the whole nation.

Help for Heroes believes that those who serve our country deserve to be supported when hurt. Every day, men and women have to give up their career in the Armed Forces following physical or psychological injuries. The Charity helps them and their families to recover and get on with their lives. He has already supported over 26,500 people and will not stop until every injured veteran receives the support they deserve.

n To donate to Kate’s efforts and help support veterans, visit justgiving.com/fundraising/Kate-Orchard. For more information on Help for Heroes or to get help, go to helpforheroes.org.uk.

After proving the need for no-code apps, Glide awarded $20M Series A – TechCrunch