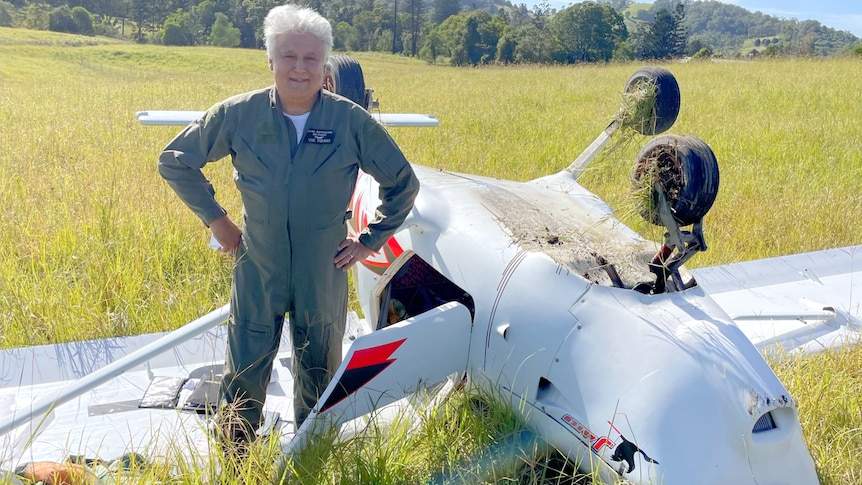 Vic Pisani feared the worst when the propeller of his single-engine plane stopped moving in the air.

He said he made a distress call and spoke to another pilot as his helpless craft “turned into a glider” which was set to descend south of Gympie.

“The guy on the other plane was trying to figure out exactly where he was and I couldn’t figure out where I was, because I was trying to land this thing out of the way of the trees,” said declared Mr. Pisani.

“I had to keep an eye on the speed because one of the biggest dangers in doing an unexpected landing like this is to stall it in a turn and…it’s a much bigger accident than just landing quickly on rough terrain.”

Mr Pisani successfully lined up the landing at a paddock in Imbil, in the Sunshine Coast hinterland, around 10am on Monday.

He was oblivious to the two builders working at an adjacent property who watched in disbelief as the plane crashed.

Rushing across the ground, the nose struck uneven ground and equilibrated “for about 10 seconds” before the aircraft flipped onto its back.

“So I had to undo my seat belt backwards, open the door…the door wasn’t even damaged – it opened fine and [I] crawled out of the wreckage,” Mr Pisani said.

Once outside, he noticed oil under the plane.

“Something clearly catastrophic has happened to the engine,” he said.

Mr Pisani said he was extremely relieved to have left the “terrifying experience”.

“Worst places to hang out”

Hours after the crash, Mr Pisani said he had just bought the plane from Gympie and was flying it back to New South Wales.

“There are worse places to knock down and the outcome could have been much worse,” he said.

His family expressed their gratitude on social media for those who ran to help.

“We are so grateful to the professionals who rushed to Vic’s rescue, the emergency personnel and everyone concerned to make sure he was okay,” said Amanda Pisani.

“Thank you all from the whole Pisani crowd.”

Mr Pisani said it was his first and “hopefully last” incident in more than three decades of flying and he was unsure he would return to the air.

“There was some pressure from family, I guess,” he said.

“But I’m a little anxious to get back in the saddle.”

The veteran pilot had recently taken a refresher course and the recommended private pilots were doing their emergency drills regularly.

He is now returning home to the Port Macquarie area by train.

Mr Pisani said Recreational Aviation Australia would investigate the cause of the accident pending an insurance assessment.

Local news straight to your inbox

ABC Sunshine Coast will air a summary of the week’s news, stories and photos each Wednesday. Sign up to stay connected.