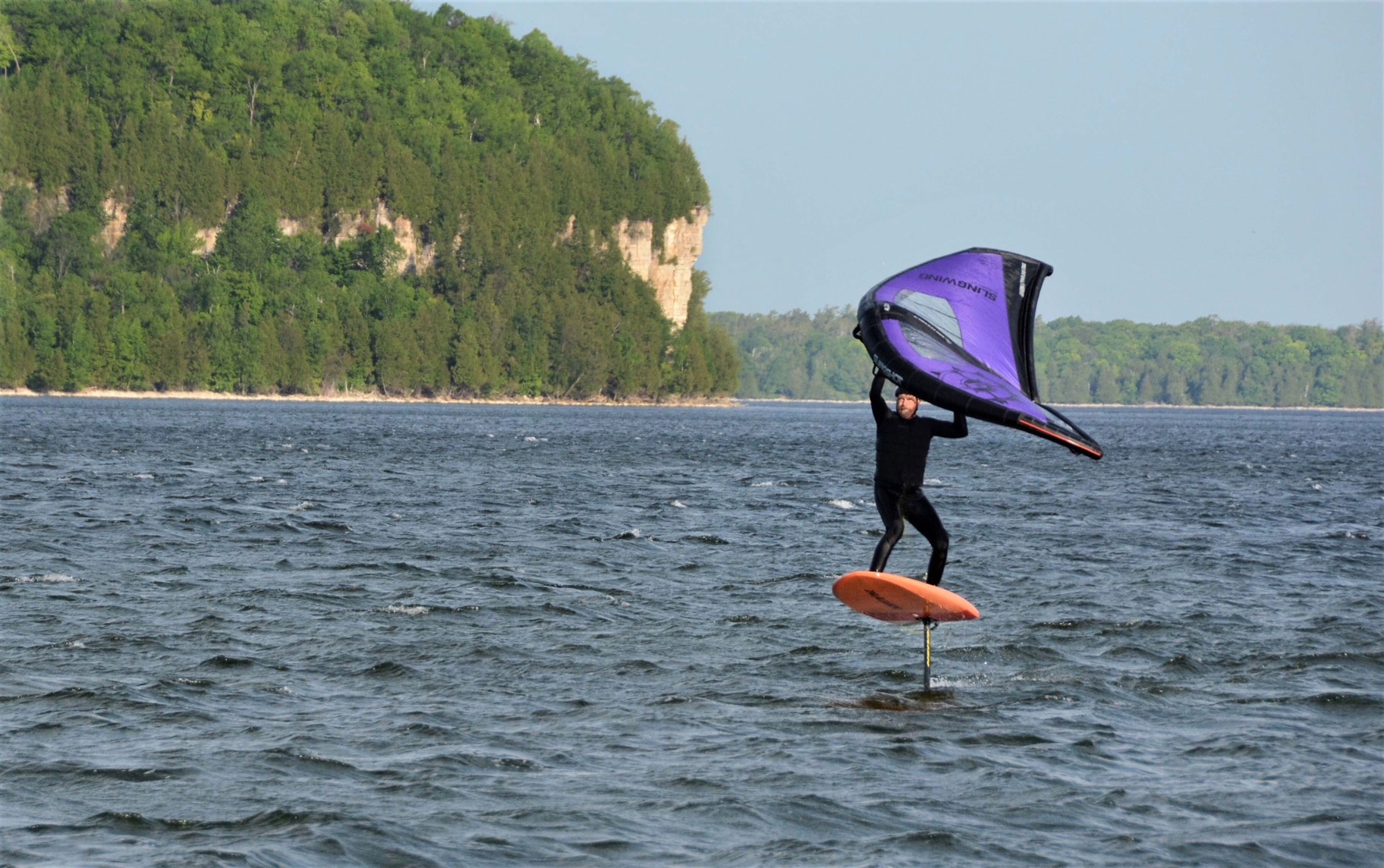 Lars Topelmann was one of the first windsurfers in Eagle Harbor when he was 16 years old. Now 57, he is the first person in the same port to try out the latest water sport: wing foiling.

“It’s like floating, like flying on the water,” Topelmann said. “It’s an evolution of windsurfing, paddleboarding and kiteboarding.”

Wing foiling joins the ranks of surfing, parasailing, paddleboarding, windsurfing, kitesurfing and hydrofoiling. Without much knowledge of water sports, all of these variations of the word “board” or “sail” can be confusing, but Topelmann – owner of Pearl Wine Cottage in Ephraim and a lifelong water sports enthusiast – was happy to explain the distinctions. among the many ways to experience the wind and water in Door County.

To describe the mechanics of a wing foil, it is useful to start with the beginning of the evolution of modern water sports: windsurfing. Most people call it windsurfing, considering it requires stronger wind speeds than most water sports. A sail is attached to a board by a universal joint, allowing the sail to turn in any direction. To control it, the surfer manipulates a bar called a boom which crosses the sail.

“My parents saw people using these windsurf boards in Hamburg and Munich in the late 70s,” Topelmann said. “They said I should try here.”

Another wind-dependent water sport is kitesurfing. Using a kite instead of a sail requires lots of clear beach and a second person to help with the launch as long kite lines get tangled easily.

Parasailing is similar to kiting. It is a parachute-like device called a canopy wing. A boat tows the wing by a rope, lifting the parasail into the air.

The “wing” part of wing foiling refers to the hand-held wing. The design is particularly inspired by the Wind Weapon, a hand-held sail that offers more aerodynamic control for windsurfing. A foil hand wing is essentially an alternative to a sail, kite, or parasailing wing. It has an inflatable structure designed to mimic a kite, and unlike a sail, it is symmetrical. There is no mast or connection to the board.

“It’s completely free and flexible, which is great but adds an element of technicality,” Topelmann said.

A handwing is not exclusive to wing foiling. It can also be paired with a basic paddleboard. Paddleboarding entered the water sports scene as a slower, more accessible alternative to speed-oriented windsurfing. It works especially well for beginners who want to try a water sport without high winds.

“People have dogs on the front of the boards; people fish for it; families use them,” Topelmann said.

Paddle boards generally come in two forms. One looks like an oversized surfboard, more rounded at the tip, ideal for making turns easily. Another board option is thinner and narrower, intended for paddling long distances in one direction.

Some water sports use a mechanism called a hydrofoil, an airplane wing-like attachment for the bottom of a board.

“The plane’s profile lets you go faster,” Topelmann said. “There is no resistance.”

The inflatable chair is an example of a water sport with a hydrofoil. A seat and foot straps are attached to a plank which is pulled behind a boat. Topelmann jokes that it really is a frighten chair because it’s fast and difficult to control.

Finally, wing foiling involves attaching a foil to a shorter, thicker version of a paddleboard, resulting in a foilboard that cuts through the water in a way that doesn’t create wave action or let up. of foam like a surfboard does. The foil, rather than the board, is what floats on the water, lifting the surfer a foot or more above the water.

Thus, wing foiling involves a foilboard combined with a handwing. A surfer must shift their weight in the lower body to control the board, exerting more pressure with the front foot; and shift the weight in the arms to maneuver the kite. Thanks to the elevation of the hydrofoil, the main characteristic of wing foiling is the feeling of flying or floating rather than the intense speed, but the sport still requires optimum wind speeds of 12 to 14 mph.

To add even more water sports variations, foils can be installed on the board of virtually any sport to add a new element to surfing on the water: there’s the kite foil, the surf foil, the stand -up paddleboard foil and the wind foil.

Most water sports require a wetsuit and location is a big factor. The Lake Michigan side of the Door Peninsula is much cooler, even in the summer, so Topelmann wears a slightly thicker suit there than he would wear on the bay side. For the wing foil in particular, he wears a helmet and an impact vest because the foil is sharp and can be dangerous when a surfer falls from the board. It is also important to have a leash connecting the handwing to the wrist and the foilboard to the ankle.

Wing foiling has yet to become mainstream, mainly due to the pandemic – it has been difficult to source materials and manufacture equipment. Until the equipment becomes more widely available, the current total cost averages $3,500.

Coordinating foilboard and handwing pumping can be tricky, so it helps to practice each skill separately. Topelmann recommends learning to foilboard before adding the kite, and he said getting towed behind a boat helps get used to foiling. For separate handwing practice, he often grabs a skateboard, perfecting his turns with the handwing in parking lots.

“It’s not a replacement sport, but a new way to experience wind and water,” Topelmann said.