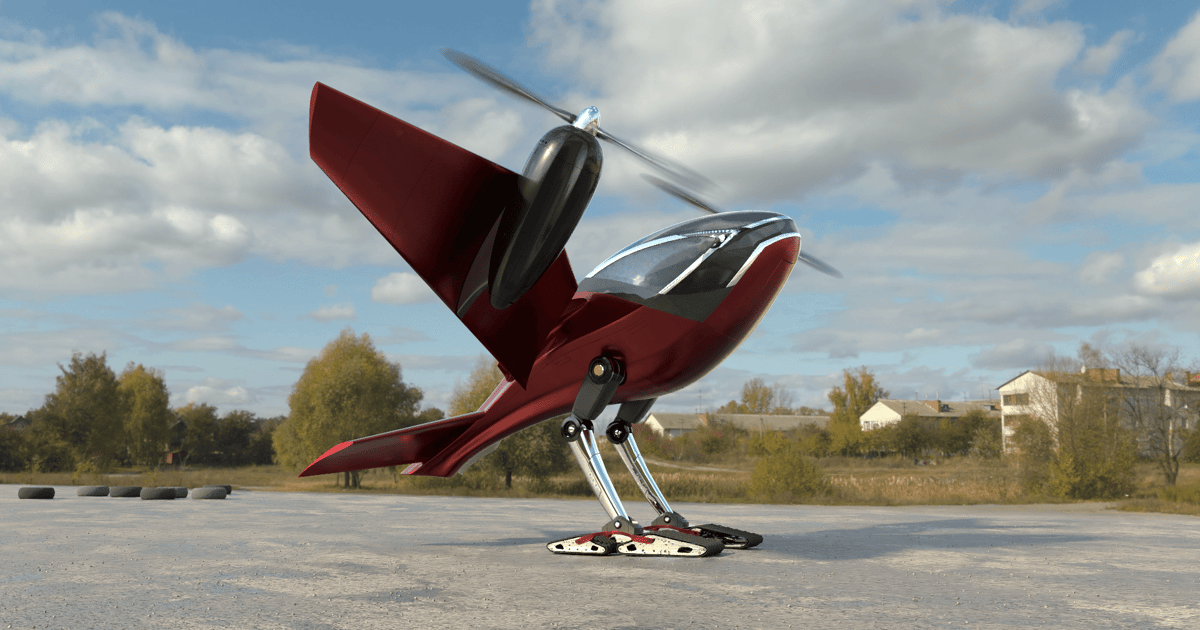 It’s a bird… and a plane? Africa’s strange “NVTOL” birdoplane

Africa, according to new electric aircraft start-up Phractyl, is in a rather unique situation as the eVTOL wave begins to break, as it has so little ground transportation infrastructure.

So planes that can take off and land vertically — without the need for runways or helipads, or incurring the high costs of helicopters — could have an impact far beyond simply reducing travel times for officers. exchangers in gray suits who don’t want to take the train. They could make an absolutely transformational difference.

So a small team came together as Phractyl to create an African solution to an African problem, and they came up with this, the Macrobat – a “near vertical take-off and landing”, or an NVTOL aircraft with struts. bird, tracked feet and a few other oddities around the wings, which seem to be able to partially tilt.

What the hell is going on here? Well, the tracked feet give this machine some very lightweight multi-terrain capabilities. The wheels may work better on rough terrain, but then you’ll need more than two of them to balance. So he is tracked, for better or for worse.

The bird’s legs, which must have fairly strong motors at the hip, knee, and ankle joints, can lift, lower, balance, and tilt the body of the plane. When it’s time to take off, it rises to its maximum height, tilts back as far as the tail will allow – nearly 45 degrees at one estimate – and tilts its wings even further out. rear, so that the large props on the fenders are angled up about 20 degrees from vertical.

The result, I guess, is somewhere between a tail keeper and a tilting wing. The Macrobat will move forward as it takes off, hence the “near VTOL” designation that Phractyl coined for it. Once in the air, the legs will fold in and out to minimize drag, it will stabilize in cruise flight and behave much like a small plane.

As for the landings, well, it looks like you won’t have the luxury of being very particular about where your feet land, given that you’ll be tilting at around 45 degrees with the sun in your eyes and no obvious way to see the ground you’re about to land on. There will probably be cameras, or something like that.

The crow’s feet can help cushion the landing, but you better be careful to slow this cheerful-looking guy down as much as possible before landing, because small runways like these won’t be able to keep up if you land with too much forward momentum, and that sounds like a recipe for an expensive face plant to us.

Indeed, there will be a wide variety of face plant, wing plant and tail plant scenarios in play as the Macrobat negotiates rough terrain, wind, weather, potholes and pilot errors – not to mention the different weight distributions in the cabin. It will take more than just Segway-style self-balancing chops; it must be able to predictively modify the balance of the system under certain conditions. Leaning back just before he brakes on dirt, for example, or leaning forward just before he starts rolling. Riding in the cabin will certainly be an interesting and different experience.

Phractyl says he’s not married to the two large props in these renders and is considering using more of the smaller props to add some redundancy. It’s also about being pretty quiet about the fenders, which it says will be more special than they look here, but the team won’t elaborate further until the IP does. be protected.

This initial design appears to be a single-seater, claiming a range of 150 km (93 miles), carrying a maximum payload of 150 kg (330 lb) and traveling at speeds of up to 180 km/h (112 mph). Phractyl says it could be piloted or remotely piloted, carrying a passenger or cargo as needed. A larger air taxi style version is also being “considered” at this stage. Initial applications, Phractyl says, could include recreational flight, EMT, medical deliveries, cargo missions, infrastructure inspection and even crop spraying.

As for progress, well, aside from these renders and a small carved wooden model, the team has been working on some lovely, homemade tests for its prototype propulsion system. Perhaps those of us more knowledgeable in aircraft design can visit the website and see if we can guess what’s interesting about this wing system by looking at the test images. They are “working on building a prototype scale model” and “actively seeking funding”.

From their email communications and their website copy, it appears the folks at Phractyl have a sense of humor as well, which will come in handy when they embark on the daunting task of fundraising, develop and build this wacky bird to any scale.

We don’t know exactly what it could do better than other more conventional eVTOL designs. We don’t know if those bird’s feet are a practical idea from a distance, or the runways below, or the “lean back and yee haw” take-off routine, or the “get the kids out of the way Gladys, I have no idea where I’m going” landing procedure.

What we do know is that we’ve never seen anything like it before, we love a good weird vehicle, and our chances of writing about oddities like the Macrobat increase markedly the closer we get to on a Friday afternoon.

“If you’re ready to submit to six minutes of uncoordinated jazz, here’s a link to a video about us and what we’re working towards,” Vivek Singh of Phractyl tells us. “The video is very geared towards a South African/African audience, but I think you might find it at least partially entertaining.”

So, my friends, you have been duly warned about jazz – but I feel like I am failing in my duty to you, dear readers, if I neglected to add that the video is told entirely as a rhyming poem of indeterminate meter , or that the Macrobat itself doesn’t appear until after the three minutes, or that the tone of the thing, much like the design of the plane, manages to leave us completely mystified as to whether this is all a project serious or not. Let me just say that in a perfect world, this thing would be able to land on power lines, then inflate its wings and drop its cargo or removable batteries through a hatch in the back.

Due diligence completed, I’ll leave you with the video. Do what you want!