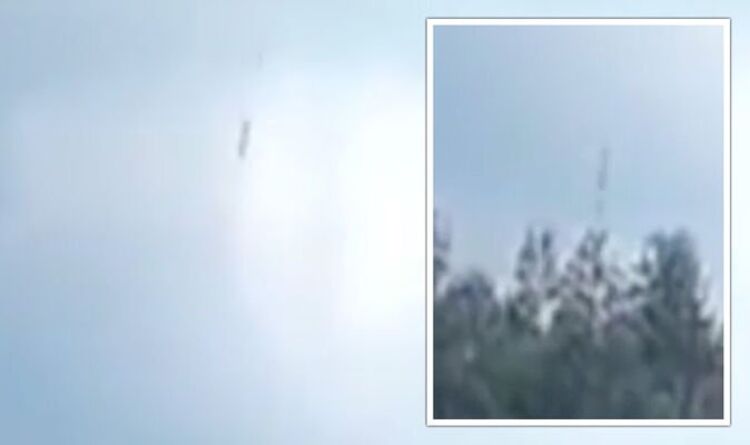 Flight 5735 crashed in the mountains of southern China while on a domestic flight on Monday after a sudden drop from cruise altitude. Local media reported that 123 passengers and nine crew members were on board at the time of the crash, saying no signs of survivors have been reported so far. Footage has since begun circulating online apparently showing the China Eastern Airlines flight “nose dive” to the ground.

CCTV footage shows what is believed to be the crashing plane, suddenly appearing on the monitor before disappearing behind a dense section of trees.

The location appears to match other crash videos showing the immediate aftermath of the accident, which took place in a mountainous region in southern China.

According to flight tracking website FlightRadar 24, Flight 5735 descended with a final speed of 31,000 feet per minute before disappearing from the radar system.

Just over two minutes and 15 seconds later, data showed he had descended to 9,075 feet.

In another 20 seconds, his last recorded altitude was 3,225 feet.

China Eastern Airlines confirmed the plane crashed with a statement in which the company also provided the passengers’ relatives with a hotline to contact.

Media quoted a rescue official as saying the plane disintegrated and started a fire destroying bamboo.

The People’s Daily quoted a provincial fire department official as saying there were no signs of life among the debris.

China Eastern Airlines confirmed the plane crashed with a statement in which the company also provided the passengers’ relatives with a hotline to contact.

The Civil Aviation Administration of China (CAAC) said the China Eastern Airways flight lost contact over the city of Wuzhou.

The CAAC said in a statement: “[We have] activated the emergency mechanism and sent a task force to the scene.

Accidents during the cruise phase of flight are relatively rare even though they represent the majority of flight time.

Boeing found in a report last year that only 13% of fatal commercial accidents worldwide between 2011 and 2020 occurred during the cruise phase, while 28% of fatal accidents occurred on final approach and 26% on landing.

Online weather data showed partly cloudy conditions with good visibility in Wuzhou at the time of the crash.

President Xi Jinping called on investigators to determine the cause of the crash as soon as possible and ensure “absolute” aviation safety, state broadcaster CCTV reported.

As Mariupol clings on, the extent of the horror is unknown | News, Sports, Jobs