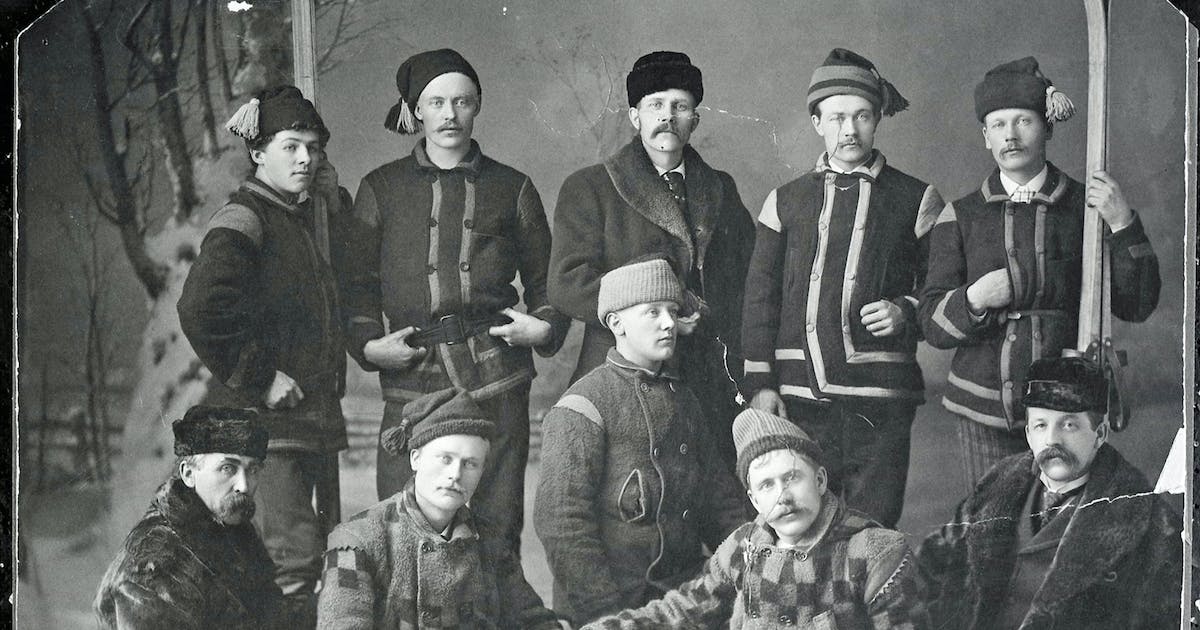 In 1932, Minnesota became the first state to make skiing an official high school sport, powered by the northern Scandinavian country. Arrowhead High School’s first regional ski meet included teams from Duluth, Coleraine, Virginia and Cloquet, and was held on the east side of Duluth at Chester Park.

Still, the state’s first official school tournament wasn’t about skimpy skis — it was all about jumps. Chester Park was also known as Chester Bowl, a perfectly hilly terrain where skiers could get in the air and let themselves down. (The Duluth Ski Club had jumped there since the early 1900s.) Cross-country skiing would be added to the tournament the following year by the Minnesota State High School League.

History is just one thread in the vast and remarkable fabric woven across the state by Nordic skiing captured from head to knee in a new book from the University of Minnesota Press, “Winter’s Children: A Celebration of Nordic Skiing by author Ryan Rodgers.

Rodgers goes back – a long way – to the origin of skiing but moves quickly towards its arrival (via Norway, of course) in the Upper Midwest and Minnesota, to the current popularity of cross-country skiing, including the golden speed by Jessie Diggins of Afton. And that’s a good thing, because there’s a lot to be said and re-enacted about the ups and downs of skiing – and ups.

Like why and how ski jumping was enjoyed by many high school kids over cross-country skiing all those years ago.

Beginning the project in 2019, Rodgers browsed through old articles, visited historic centers and occasionally sat in wax sheds to hear from families built and transformed by sport. For all the rich character and rhythm detail in Nordic skiing, Rodgers said he found himself producing something more.

“I didn’t want to write it just for skiers,” he said. “I wanted it to appeal to skiers, but I wanted to appeal to anyone. I wanted the story to stand on its own.”

In a conversation about his book, Rodgers talked about the character-driven arc of Nordic skiing, but also about what slides. His comments below have been edited for length and clarity.

The depth of the sports and the successes are interesting – and so much in Duluth, from Chester Bowl to the Fond du Lac jump. Was Duluth the heart of skiing in Minnesota?

There are hotspots, and you could argue for a long time in Duluth. I must add that writing the book caused me to move to Duluth. Talking to people here, there’s such a great outdoors ethic. It was talking to people and being struck by how many people have this deep reverence for hiking and skiing and that sort of thing. It could be argued that Duluth was the heart of the Nordic ski scene. It’s become so mainstream now, it’s really followed population and income. There are many exceptions, but now the ski teams, for the most part, are down in the Twin Cities. At the time, there was no other place that had so many people who were passionate about cross-country skiing and jumping. What was so cool was that I could follow the trail, talk to people, and they were talking about someone I had never heard of. Then I would look into that person and find out about that guy, Pete Fosseide, for example, or Erik Judeen. And you could trace the legacy through the generations. It was really interconnected. The cross country scene was largely based around these particular individuals. Jumping was a little different. There were some real national stars here who didn’t fall so well into that legacy.

Some book readers might be surprised at the popularity of jumping, even as a part of high school until the late 1970s. It seemed more valued as a discipline than cross-country skiing.

Really, the fall of the jump was brought by downhill skiing. There were similar sensations and it was much easier: you didn’t have to go up the jump. You didn’t have to prepare for the jump. You just introduced yourself. The new equipment made the descent much easier. The descent took off; ski jumping has faded and continues to fade. Although it has stabilized as its own niche sport these days. There are still a lot of avid jumpers out there, but there just aren’t that many.

Before World War II, these were mostly wealthy Americans familiar with the descent. It was a glamorous, upper-class thing. With WWII, you have all these GIs in Europe, getting to grips with this fun, glamorous descent scene. When they come back to the States, they take the idea of ​​the European descent experience and they launch it on a large scale here in the United States. Also, after World War II, people wanted to relax, they wanted to have fun, there were shortages, people were being killed in battle, it was a difficult time. After the war, the spirit of the country was to experience alpine skiing. Cross-country skiing is an intense and challenging sport, and that’s at the heart of it. The period after World War II was not geared towards this. It wasn’t until the next generation – baby boomers – sought something different from their parents that they took up cross-country largely as a way to connect with nature after favorable times. to suburbs and expansion.

Your work reminds me of other activities – like speed skating – that were wildly popular, especially in the late 19th and early 20th centuries. Looks like there is a connection to some of the racing and jumping events.

I know that (speed) skating was popular in Norway and was growing as a popular activity, along with cross-country skiing and ski jumping. Cross-country was never particularly popular 100 years ago. She had her supporters. In the 20s and 30s it was more popular than in the 50s and 60s. Ski jumping was a popular draw. Big tournaments. Several thousand people show up.

There was no TV. People were out. They wanted things to do. There was more than one public life at the time. And there were just a myriad of other activities that people went to.

Has the project changed your vision of Nordic skiing?

We are losing this type of skiing. The natural snow season is already shorter and getting shorter. And it doesn’t happen all at once. It’s like you’re a kid drinking liquor from your parent’s liquor cabinet an ounce or two at a time, and then one day dad goes to mix up a Bloody Mary and it’s all gone.

On the other hand, Nordic skiing as a competitive sport continues to grow in popularity. This is because every year more and more places produce snow. More and more children are getting into sports. Parents realized that cross-country is a fantastic and healthy sport for life. It’s a really healthy culture.

Cross-country was once the sport of working-class Scandinavians, but now it’s really become this urban, suburban sport for the upper-middle class. There are efforts to counter this stuff coming out of both sides of the Loppet Foundation. On the one hand they have this very expensive elite training program, but on the other hand they have a very cool elementary school ski program in schools in Minneapolis where most of the kids are of color .

Correction:
A historical photo in an earlier version of this story incorrectly referred to Peter Fosseide. It’s his cousin Magnar in a Norwegian competition.

Ice dodgems are the best winter activity in Washington